I am going to switch it up a bit on these posts and just put my thoughts on the card and just a quick blurb on his career. Most people probably don't care if I list out his stats and can look them up anyway on Baseball-Reference. 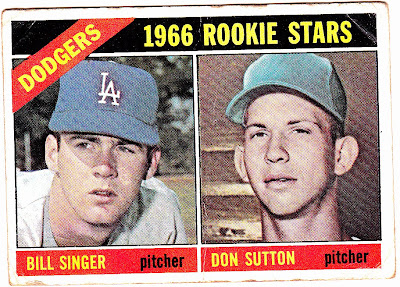 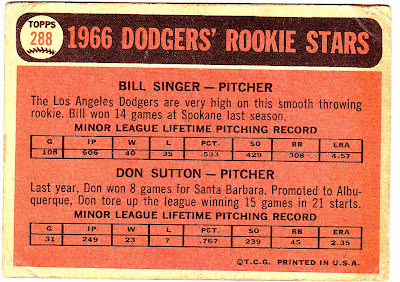 Card: 1966 Topps #288 Dodgers Rookie Stars
How I got it: Purchased on Ebay
Cost: $6.52 delivered
Why I Bought it: For my HOF Rookie Card Project
My Thoughts: Damn, Sutton has some monsterous looking ears in that photo. It looks like to me that Topps airbrushed a blue hat on him. Sutton was one of those pitchers that was good but never considered great during his career. Granted he did have a 324-256 record, but he played on some pretty impressive teams as well. Sutton was inducted into the hall of fame in 1998. The other guy on the card Bill Singer played 14 years compiling a career record of 118-127. He did win 20 games in a season on two occasions which was one more time than Sutton did.