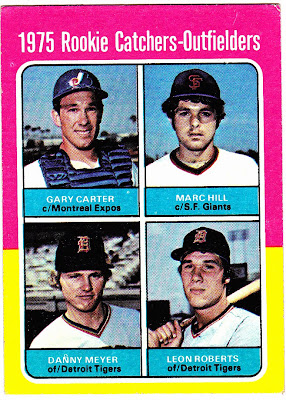 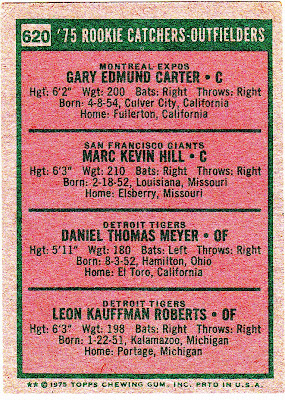 I guess it's fitting that my first post for my hall of fame rookie project would be for Gary Carter, the man we lost two days ago. I already went in depth on how he touched me personally, so this post will be strictly about his career and my thoughts on the card.

First off, I will say, I am not a big fan of the multi player rookie cards that Topps put out, maybe even still puts out I am not sure. It just sucks to me that someone like Gary Carter has to share his rookie card with 3 no names, but then again no one knew Carter was going to be as great as he was either.

Carter was drafted by the Expos in the 3rd round of the 1972 draft. He made is major league debut on September 16th, 1974 an played in 9 games to finish out that season. The next year, Carter hit .268 with 17 hr's and 64 rbi's finishing second in the rookie of the year voting to John "The Count of" Montefusco. Carter was also an all star his rookie season.

1976 saw Carter break his finger so he was limited in playing time. The next season with a new group of young outfielders, Carter quit splitting time between catching and playing the outfield, and became the Expos every day catcher. He blasted 31 hrs and knocked in 84 that season. By 1979 Carter had established himself as one of the best catchers in the game. He would go on to reach 10 consecutive all star games where he had several moments of clutch heroics.

After the 1984 season Carter was traded to the Mets. He continued to shine there with 32 hrs in 1985 and then of course the magical 1986 season where he led the league with 106 rbi's. 1987 saw Carter's numbers start to come down and then in 1988 he had his lowest totals of hrs and rbis since 1976. After a tough year in 1989 The Mets released him and he went on to finish his career with the Giants, Dodgers, and finally back to the Expos.

Carter finished with 324 career homers 1225 runs batted in and a .264 career batting average. He was inducted into the hall of fame in 2003 his sixth time on the ballot. He passed away at the young age of 57 on February 16, 2012 from brain tumors.

Since this is a multi player rookie card, lets take a look and see how the others on this card stacked up.

Danny Meyer - Was a solid player for the Mariners in the late 70's. He hit 20 hr's or more twice during that time span. He finished his career with 86 homers 459 rbis and a .253 batting average.

So this rookie card actually produced a hall of famer, 2 pretty good utility guys, and a back up catcher that stayed employed as a major leaguer for 14 years. This has to be one of the better multi rookie cards that Topps produced.