Just ripped 84 more retail packs of this set and finally finished my base set...I got probably 74 or so mini's that I need, now I probably only need about 400, haha.  I will update my want list once I get all of these little motherfuckers collated.

I have bitched in the past about pulling the colored paralells from this set, but this time I was actually pretty happy.  I pulled a yellow version of both Bobby Orr and Wayne Gretzky which I should be able to make a couple of bucks on Ebay with.  Also pulled a yellow animal front Ryan Miller and a jersey card with a sweet yellow swatch of Mikka Kiprusoff. 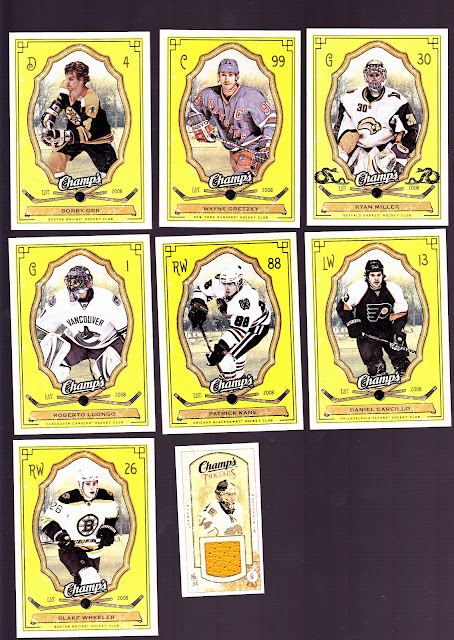 Finally nailed a big one

Now I know for a lot of you guys, this isn't that big of a hit.  But for me this is huge.  I don't normally pull anything decent from packs.

I decided to pull the trigger on a hobby box of Upper Deck series 1 to try and finish my base set and nail a Ryan Nugent-Hopkins Young Guns.  While at the LCS, I decided I would buy the last two loose packs of series 1 they had as well.  Thanks goodness I did, because in the first pack I ripped, BAM, I pulled the RNH Young Guns card.  My collecting week,month, heck maybe even year is made now.  Now I can open my hobby box tonight without the nervous anticipation of having to hit this card.

Posted by stoneski at 4:28 PM No comments:

Product: 2011-12 Upper Deck Hockey Series 1 Retail Fat Packs
Cost: $4.99 per pack
Qty: 4 packs
Cards per pack: 32
Location: Shopko
I must admit, I have an addiction to this set.  I don't know why, but I get all nervous if I go to the store and don't buy any of this.  I love the set, but I don't like the feeling I get when I don't have any to rip, I didn't realize someone could really go through card withdrawls, but I was.
Anyway, I had to take a grumpy kid for a ride last night so we went to the one store we never go to, Shopko.  At first I only found a couple fat packs of OPC, but then we found the motherload, Upper Deck Series 1 fat packs.  I quickly put back the O-Pee-Chee and grabbed the four remaining of these they had. 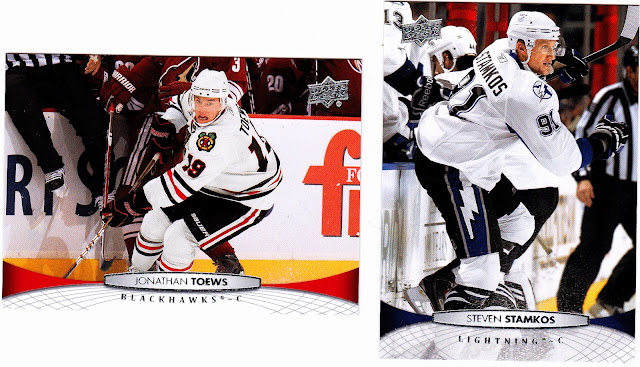 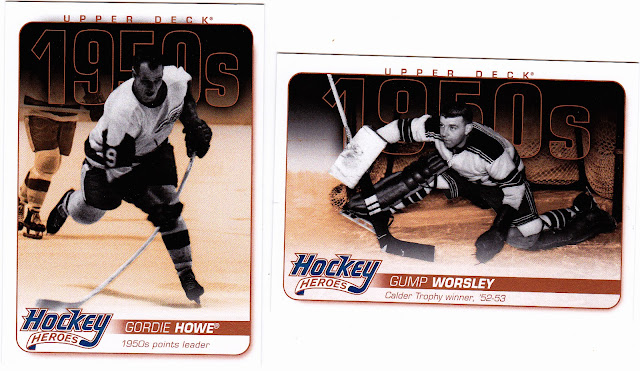 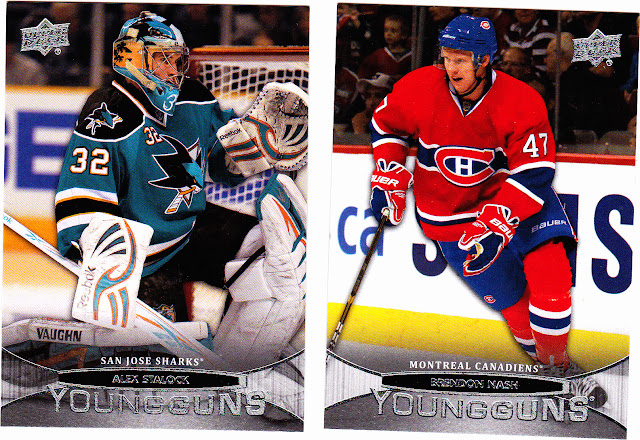 Young Guns:  Pulled my first two young guns cards ever.  While they weren't the big one, I was glad to get these.  48 more to go. 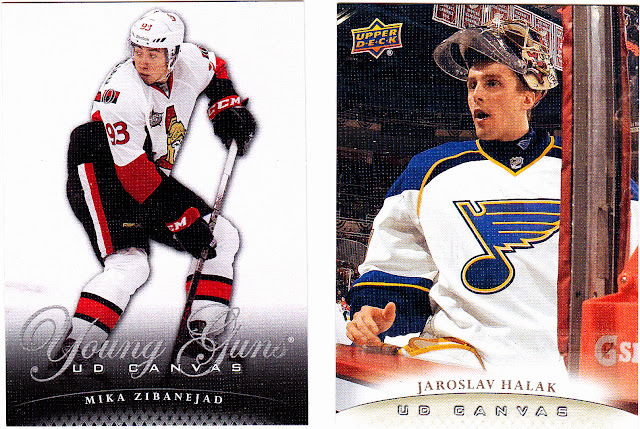 UD Canvas:  I was very happy with the Mika Zibangejad Young Guns Canvas that I pulled.  That will either pay for one of these packs by going on Ebay or will be added in with a trade to someone.  Also pulled a Jaroslav Halak Canvas.  I love the Canvas set, but I don't think it will be possible for me to finish, it's just too damn big.
As I have said before, I am in love with this set.  I will most likely be picking up a hobby box of this on Saturday and hopefully that will knock out the rest of the set.
Posted by stoneski at 9:32 PM No comments: 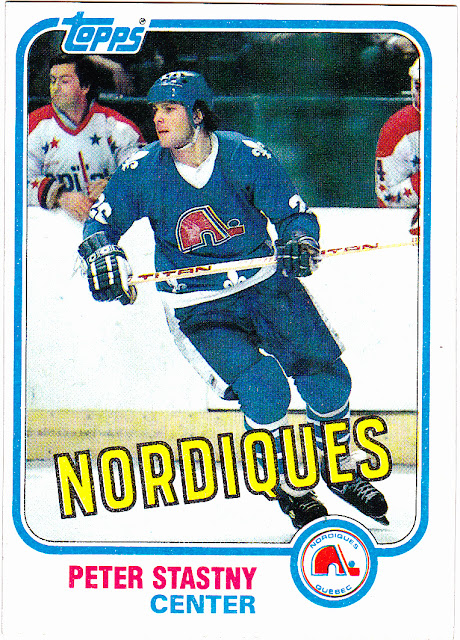 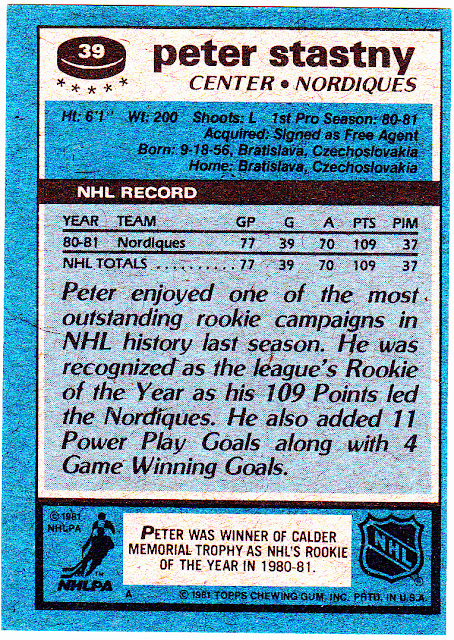 There is no better way to start posting the cards in my player collections, than starting out with a hall of famer.  Here is the Topps Version of Paul Stastny's rookie card.  I picked this up in a lot of 110 cards from the 1981-82 Topps set off of Ebay for $0.99.

Stastny defected to Canada in 1980 along with his brother Anton.  In his rookie season, Stastny netted 39 goals and handed out 70 assists to total 109 points.  He was the first player to score over 100 points in his rookie season, since Gretzky wasn't technically a rookie in 79-80 due to his time in the WHA.
Posted by stoneski at 10:00 AM No comments: 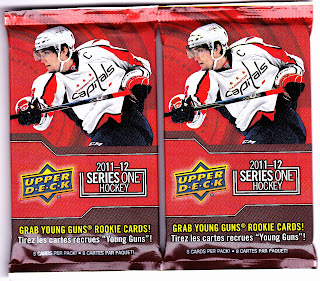 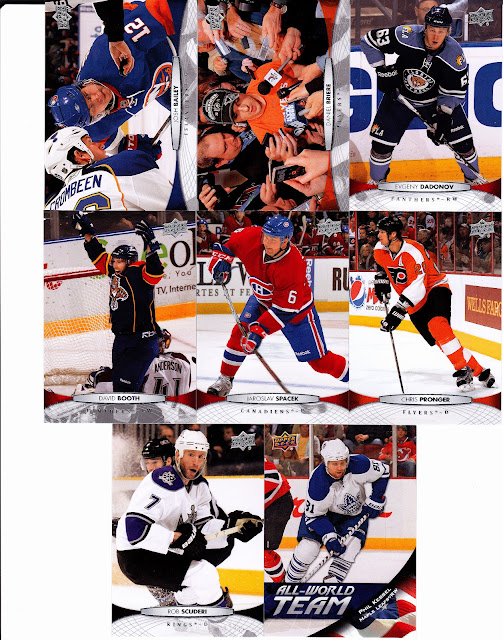 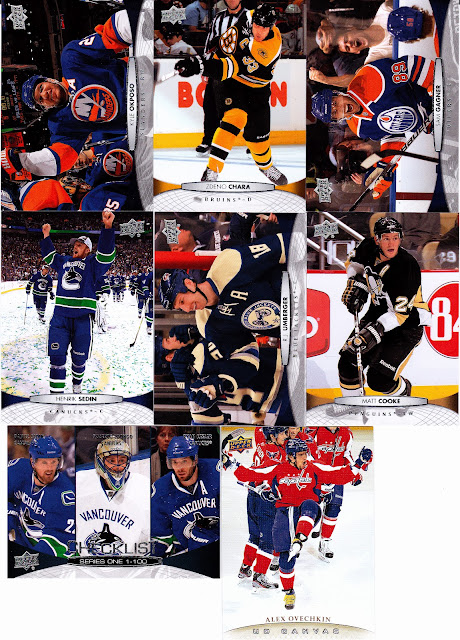 I picked these up off of Ebay for $13.90 shipped.  It is all but #1 of the non short print minis from this set.  I absolutely love, love, love these cards.  The guy I got these from paulie_pavillion is a great seller.  He is the same guy I picked up most of the base set of Parkhurst Champions from.  Good deals and he is very meticulous and fast with his packing and shipping. 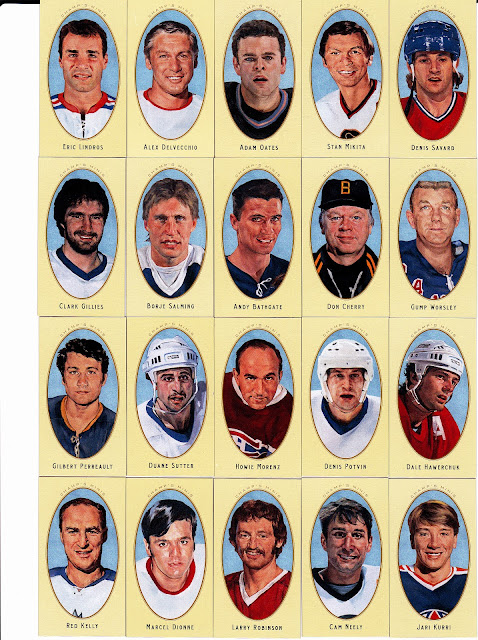 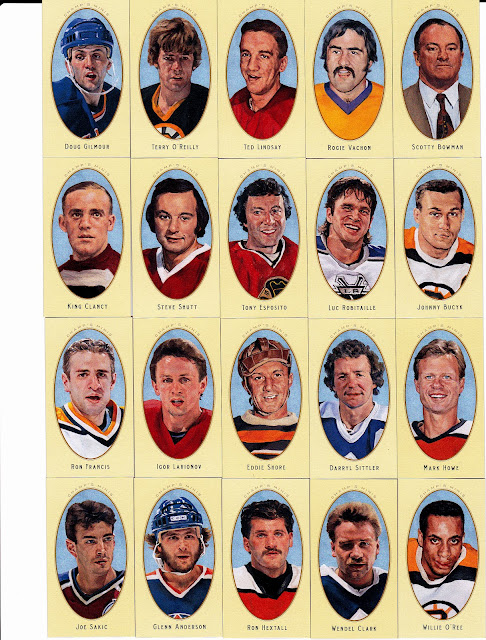 Out of all the great cards in this set my favorites are Grant Fuhr, Peter Stastny, Rogie Vachon, Tony Esposito, Denis Potvin, and Clark Gillies.

I am now down to only needing 12 base cards, 1 regular mini, all SP minis and all Wire Photos and Rendition Cards now to finish this set.  So far this is my favorite hockey set that I am working on.
Posted by stoneski at 8:00 AM No comments:

Mailday #3 - Trade with Justin from The Hopeful Chase

Justin who runs http://hopefulchase.blogspot.com/ contacted me a couple weeks ago about some 2009-10 Champs minis that he was willing to trade me.  I still owe him a package, it will be in the mail today, I promise.  He traded me 9 minis I needed for my set, I am down to needing only about 423 more minis to finish this set...Holy Cow what did I get myself into. 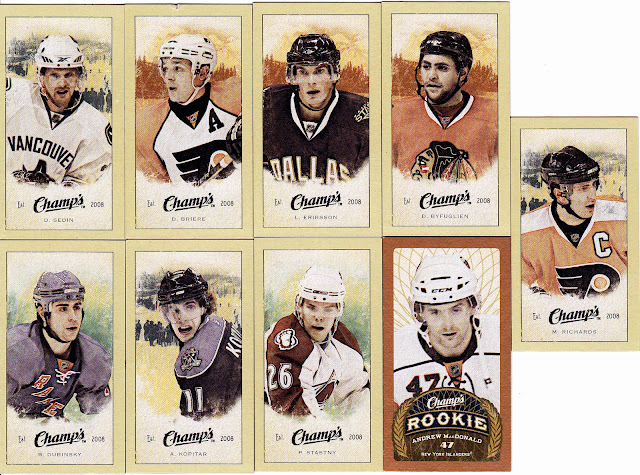 #359 - Daniel Sedin - One half of the bunk bed sleeping Vancouver twin sisters.
#320 - Daniel Briere
#304 - Loui Erikson
#302 - Dustin Byfuglien - A key player on the Hawks Stanley Cup run from a couple years ago.
#270 - Mike Ricards - Was the captain of Philly's finals team from 09-10.
#264 - Brandon Dubinsky
#246 - Anze Kopitar
#222 - Paul Stastny - The son of Quebec Nordiques great Peter Stastny, who I just so happen to have started a player/team(Nordiques) collection of.
#104 - Andrew MacDonald - Mini rookie.  These are tough to get, so I was pleased that one of these were included with our trade.
Posted by stoneski at 8:00 AM 2 comments: