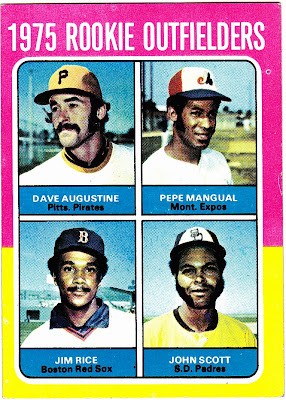 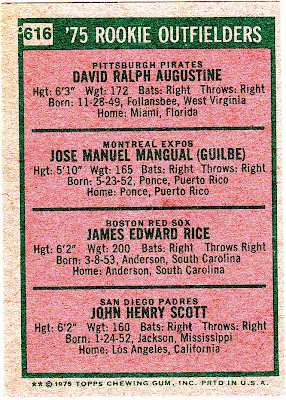 Another hall of fame post and another 1975 Topps multi player rookie card. This time it is Jim Rice.

Rice broke into the league in 1974, with his official rookie season being 1975. Like Gary Carter he was runner up for ROY in 1975, losing out to his teammate Fred Lynn. Rice, Lynn, and Dwight Evans would team up to form one of the most formidable outfields in history in the late 70's.

His entired career was played in Boston like his predecessors in left field Ted Williams and The Yaz.

Rice was finally inducted into the HOF in 2009 in his final year of eligibility.

Sorry I don't have much more to say on Rice. While he played during my childhood, I don't think other than the 86 World Series did I ever see him play and I must admit I hate the Boston Red Sox.

Since this is a multi player rookie card, lets take a look at the other guys on the card and see how they did.

Dave Augustine - Lasted only 2 seasons in the majors playing in 29 games having 29 AB's. So needless to say, he was a scrub.

Pepe Mangual - Played 6 total seasons between the Expos and Mets. Finished his career with 16 HRs 83 RBIs and .242 AVG.

John Scott - Played 3 seasons never playing in more than 79 games in a season.

So unlike the Gary Carter rookie card where everyone had at least a serviceable MLB Career, this card shows you just how uncertain the prospects can be. Everyone outside of Rice on this card was a scrub.
Posted by stoneski at 6:53 PM