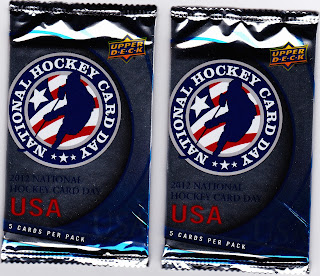 I ran to the local hobby shop on Saturday to pick up a box to ship some cards and ended up picking up a couple packs to rip for the hell of it. Much to my surprise, I also received these two packs for free, since 2-11-2012 was national hockey card day. Now I knew this, but I also didn't have any idea that my local shop was participating. This was a nice little gesture by Upper Deck and it definately will cause me to buy some more of their products. 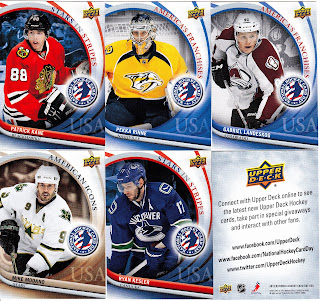 Pack 1 - There are 5 cards per pack and taking a look at the checklist there are 15 cards in the set. After a little research I found out that there are actually 16 cards in the set as there is a Tim Thomas card that is number 16. Out of the 5 cards in the first pack I have actually heard of 4 of the guys, which is pretty good for me since I haven't bought modern hockey cards in probably 20 years and I only follow the sport enough to know how the Blackhawks are doing and they I get pretty rapid around playoff time as well.

#4 - Pekka Rinne - I only know of this guy because of the great NHL 10 game from EA Sports. I have scored against him multiple times.

#1 - Gabriel Landeskog - No idea who this guy is. Reading the back of his card tells me he was the #2 pick in the draft this year, so he should be a superstar soon right?

#13 - Mike Modano - One of the few old school guys in this set. I remember being excited to pull his rookie card way back in the day.

#8 - Patrick Kane - Yessss. I pulled the one Blackhawks card in the set. Kane and Toews are the future of the franchise, hopefully they can pull out of this awful funk they are in. 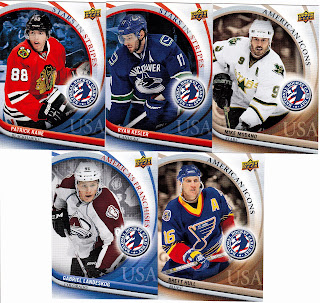 Pack #2 - Well collation isn't going to be strong in these packs since there are only 16 cards. Out of the 5 cards in this pack, 4 of them were duplicates, at least one of them was Patrick Kane again which will go into the Blackhawks collection.

#14 - Brett Hull - This was the only non double I pulled. I'll take it since he is another one of the guys I used to collect 20 something years ago.

All and all this was a fun rip and it was made even more fun by the fact it was free. Maybe more companies should do things like this to try and build the hobby back up.