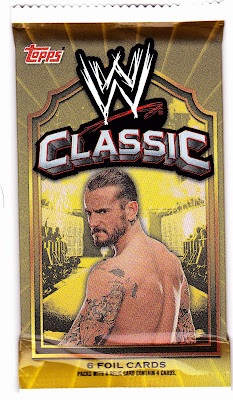 In honor of my sons first live WWE Event, which was last nights Elimination Chamber in Milwaukee, WI, today we will check out Topps latest WWE offering. Capitalizing on the popularity of the current WWE Champion, they have put CM Punk on the wrapper. 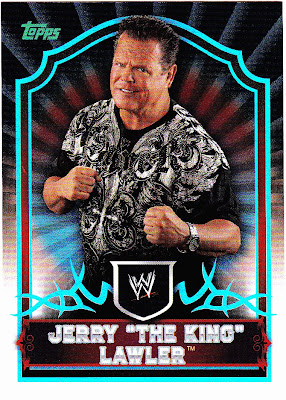 First card is none other than Jerry "The King" Lawler. The guy was always the heel announcer when I watched wrestling as a kid. Now that I have been watching it for the past 6 months, he has turned into the good guy announcer with the really obnoxious Afflication rip off shirts. I still respect him greatly though for what he did for the business in the late 70's early 80's. 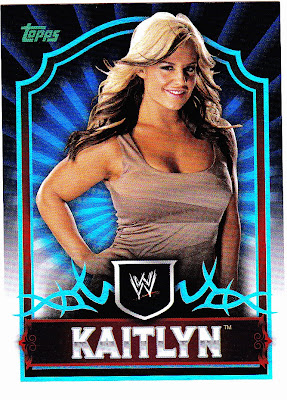 Next up is Katilyn. I am not really sure who the hell she is. I think I have seen her on TV once maybe. Reading the back of the card says she was the Diva winner of NXT, which is a shitty internet show that WWE produces to try and create young talent. Googling her tells me she is a fitness model and will also pull up some soft non nude but NSFW photos. 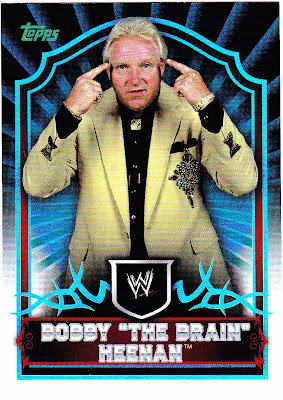 The third card is non other than Bobby "Weasel", I mean "The Brain" Hennan. The Brain will go down as the best manager of all time. His story lines in the mid 80's to early 90's were gold. And then he was just brilliant as a commentator as well. He's a shell of his former self now since he's been battling throat cancer for the better part of 10 years, but he was always one of my favorite guys to hate when I was a kid. 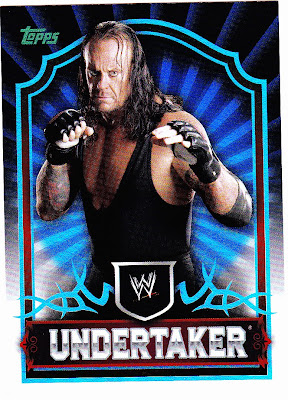 Undertaker is next. The dead man is a legend in the business. It is sad to see him completely break down and not be able to perform like he used to, as he was one of the great dominant workers. He will get a chance on April 1st, to try and run his Wrestlemania streak to 20-0 against HHH. 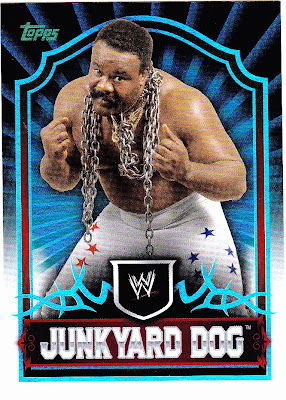 JYD is next. I was never a big fan of his growing up as he was more of a comic act than a legit wrestler to me. All of his matches turned into brawls where he would win either by DQ or Countout or he would lose after being hit by a phone or megaphone. Sadly, he passed away on June 2, 1998 when he was in a single car accident after falling asleep at the wheel. 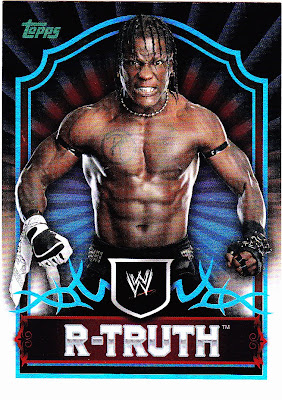 R-Truth is the final card in the pack. This guy is a fuckin' goof and is not that great of a wrestler to watch. He has solid athletiscism, but his matches are nothing fantastic. His mic skills though make up for it as you can never tell what the hell he is talking about. Plus my son loves him, so that makes him okay in my book. Lil Jimmy says, thats the end of the pack and that's the truth, the whole truth, and nothing but the truth.

So I have to say I do like the look of these cards. Minus the stupid fucking barbed wire tattoo looking thing on the bottom these cards are pretty solid. It seems that there are a solid mixture of legends and current wrestlers. I will probably tackle the set since it is rather small and I can pick up most of the singles I need cheaply on eBAY. If anyone actually reads this blog and has some they would like to trade, feel free to send me an emal.
Posted by stoneski at 12:42 PM