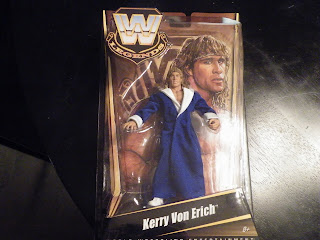 This is the first installment of Figure Friday, the one segment on this blog that will be devoted to a different figure each week. This is also the first real post on the blog, so if anyone happens to come across this a read it, please take it easy on me.

Our first featured figure is the WWE Legends Series 6 Kerry Von Erich figure. This is the "one" that lit my collecting fire again. When I looked at the back of the Texas Tornado box and seen they were making this figure, it became my obsession to find this beast. While I never actually found it, my wife did, and thats one more reason she is fucking awesome.

Kerry was my idol growing up. Watching classic WCCW wrestling on ESPN at 3:00 PM every day was a staple for me back in 1988 and 1989, and Kerry was the man in that promotion. He was the big muscled Texas version of Hulk Hogan/Jerry Lawler/Ric Flair, etc...When he won the title from Ric Flair at The David Von Erich Memorial, the raw emotion of him winning the belt coupled with the recent death of David was one of those moments that makes professional wrestling great. Sure, it's scripted and fake as hell, but it still tells a great story. Unfortunately, drugs and depression got the best of Kerry and he killed himself on February 18, 1993 by way of gunshot to the chest. The Kerry figure depicts him in all of his glory during the mid to late 80's. 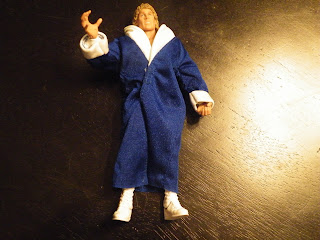 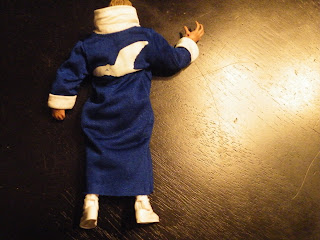 The detail of this figure is awesome. Kerry comes with his Blue Robe on that I believe he wore in his 1982 2 out of 3 Falls match against Ric Flair. It might not be the exact one, but I know for sure he wore a blue robe with the white tights and the white boots with the long athletic socks. Simple and to the point, nothing flashy as that just wasn't the way the business was back then. 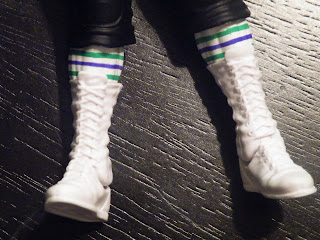 I love the detail of the long socks. How fuckin' cool is that. 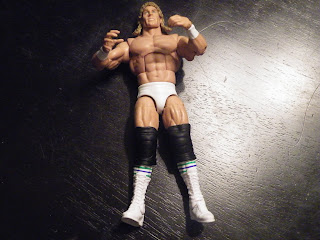 Kerry comes with his right hand in the claw position as that was his finishing move back in the day. His finisher changed to the discus punch when he came to the WWF, but we will address that when we go over the Texas Tornado figure.

I have to say that I am loving the detail that Mattel puts into these "Legends" figures as well as their "Elite Collection" figures. Next week we will take a look at Kerry's brother Kevin.