Product: 2007 Topps WWE Heritage III Hobby Box
Cost: $33.95
Qty: 1 Hobby Box - 24 Packs
Cards per pack: 5
Location: Dave and Adam's Card World
I purchased this with the hope of building the base set and getting a nice start on the Allen and Ginter legends set, and I did just that.  I was able to put together a complete base set with about 20 duplicates (they are for trade if anyone wants them, all I ask is for either some wrestling or hockey cards in return, I don't care what.) 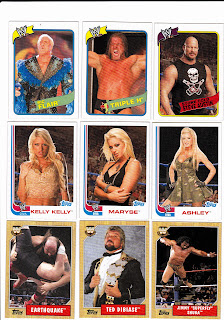 Base Cards: The base cards in this set come in 3 designs.  Current superstars are in the 1980 Topps design, divas 1982 Topps, and legends 1987 Topps.  While I am not a huge fan of the 80 or 82 designs, I
do love the 87's for the legends.  The checklist is great too as there were legends I have never had cards of before like Earthquake and Papa Shango and Ric Flair was still in the current superstars and that was my first ever Ric Flair card.  I was able to complete the base set with just one hobby box which means Topps did a nice job with the collation on these.

Allen and Ginter Mini Legends - This is a really cool set that takes the A&G mini design and puts 12 legends on it.  I pulled 5 which is just about right for the stated odds.  I think I should have received one more, but I am okay with 5.  Of the 5 I pulled, one was Ravishing Rick Rude, which is just plain awesome.  Now it will be time to hit eBAY and pick up the other 7 to complete the set.﻿ 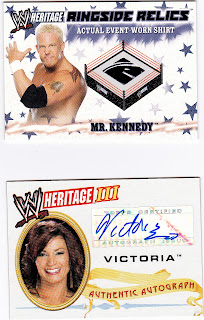 ﻿The Hits - My two hits for this box where a Mr. Kennedy ringside relic and a Victoria auto.  Pretty blah since neither one of them are around the WWE anymore.  I wish the WWE releases would quit featuring sticker autos as well, it really cheapens the auto's in my eyes.  Oh well, if anyone is interested in either of these, let me know, they are both for trade.
Final thoughts on this box is that it was a blast to rip.  I had a ton of fun and was glad to finish the base set.  I probably will not buy another box of it since I have finished the base set and would be wasting money ripping packs to try and finish the mini set.  It was also a plus that both of my kids had fun ripping this with me as well.  My daughter thinks I am delusional for collecting cards, yet she ripped almost every one of these packs.  My son who loves wrestling was more excited for the gum that came in the packs, that was until he chewed a piece and realized that 5 year old gum is bad...Not nearly as bad as 30 year old gum though, which my wife found out the hard way last year when she at a piece from 81 Topps baseball.
Posted by stoneski at 12:20 PM