Base Cards:I didn't keep count exactly how many of these I received, but I did finish a complete base set of 1-110 with a couple of dups. The base cards contain both current superstars/commentators/divas and legends. The design is that of 2011 Topps Baseball. Overall this is a very sharp looking base set.


Heritage Legends:I pulled 6 of these in the box which worked out to 1:4 packs like the stated odds. These cards are legends and they are on the 1962 Topps baseball design. Let me go on record saying I love,love,love this insert set and I was super happy to pull One Man Gang as he was one of my favorite heels back in the day. 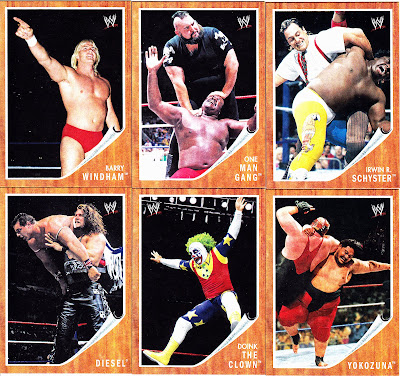 Catch Phrases:I pulled 3 of these. These depict a superstar with their catch phrase on it. I was happy with the pulls as you can never be upset with a John Cena card, Goldust was awesome back in the attitude era, and Vicki is a great heel character. I do wish I would have pulled The Miz though.

Electrifying Entrances:3 pulls with one of them being Rey Mysterio who I can't stand, R-Truth who is a goofy bastard, and Randy Orton the star of Smackdown.

Prestigious Pairings:These cards feature superstars who were paired together that don't typically work as a team. Another Cena pull is good, and Sin Cara is a sweet looking character, so the two of them together make a nice looking card. Jack Swagger and Michael Cole both suck at what they do, so this card blows. Finally the King and Good Ole' JR...These two worked together for years, so I don't know the reason they were put on a card in this series. Maybe I should read the back.

Blue Paralell's:As I have stated before I hate paralells. These look good with the blue border, but I still think it is a waste to have these types of cards. These come 1 per pack unless you receive a red or gold one. They are numbered to 2011.

The Hits:So the stated odds say you should get one swatch card and one auto per box on average. I did get those, plus a gold paralell numbered to 50. The auto I got was probably the worst in the entire set, none other than Mr. Perfect's son Michael McGillicutty or his real name Joe Henning. This guy is now only shown on their internet shows about once every 3 weeks. For my swatch card I received a Ted Dibiase Shirt relic. Teddy Jr. had a major push when he first entered the WWE, now he is stuck as mostly a mid card jobber as well. The card is sweet though and I think he will turn into a pretty good pro. As for the gold card, it is none other that Jake "The Snake" Roberts. 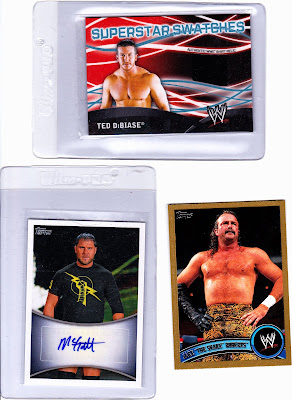 This was another fun rip and I was glad to finish the base set. I will be going after the insert sets as well, but I probably will not buy anymore packs, because it isn't worth the money when I can pick up most of these for less than a buck apiece on the Bay.
Posted by stoneski at 2:52 PM