So I finally made it up to one of the Milwaukee card shows I have been scoping out the past couple of years.  This is the first card show I have been to in probably 14 or 15 years since they stopped having them on Friday nights in my hometown.

The night before I went through my current sets I am working on and put my numbers in a handy little notebook so that I would have them to quickly go through.  It didn't matter though, no one at this show had any of the sets I was working on anyway.

So after paying my $1 to get in I started walking through the show and stopped at an older gentleman's table who said he was 60 years old.  He had some vintage cards that were on sale for 50% of what he had them marked.  There were a couple of cards I needed for my Ron Santo player collection, but they were still too high with the half off.  He did have a 50 cent box though and that is where I picked these two cards up. 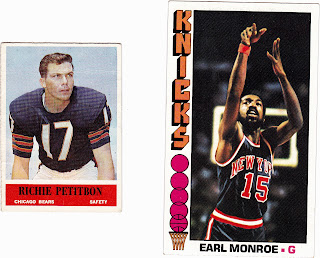 While I don't typically collect basketball I liked this Earl The Pearl card and for 50 cents, a 64 Philly Bears card is one I can't pass up.  This dealer also had some 9 pocket sheets double filled with cards for $1 a piece.  So I picked up two sheets of 1970 football and I guess that means I have now started to collect that set.  What a surprise, I didn't stay on task.  Here are the 70's I picked up, no great players but 36 cards for $2, I couldn't go wrong. 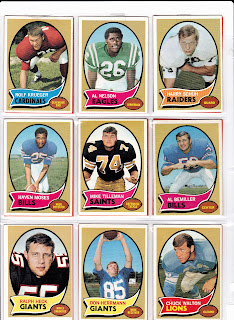 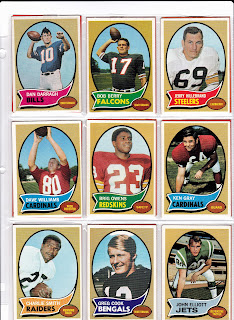 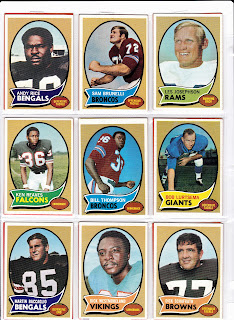 ﻿Next up was a dealer that didn't really have anything I wanted, but since I did spend about 15 minutes going through his stuff I felt obliged to spend at least a buck.  So I did by picking up a 72 Chicago Bears card and a goofy card that I can add to the weird card collection. 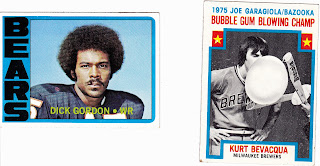 Next, I finally found the one dealer at the show with some vintage hockey.  While it was only two years worth, 77-78 and 79-80 I had a lot of fun paging through the binder.  I picked up a handfule of cards including 2 Denis Potvins and some other goalie cards.  If I haven't mentioned it before, I love the old time goalie masks and leather's, fucking awesome.  This dealer also has a website Fat Daddy's Sports, and he seems to be a regular at these shows.  He also had a ton of vintage football and baseball in binders at great prices, I just didn't have the time to go through them.  I can't wait until the next show where hopefully he will be there again and I will have time to go through some more of his binders.  Here is what I picked up from him. 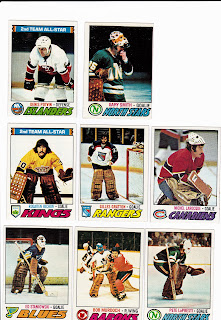 From there I was running out of time so I just took a quick look at the other dealers.  There were a couple more that were peddling vintage and then of course the shiny new stuff was in cases as well.  There wasn't a very good selection of wax at this show, I think only 2 people had any for sale and it was mostly this or last year's baseball.

While this was a small show, it was good for me since I was on such a time crunch this time (don't wanna piss the wife off more than I already do) and I look forward to going back.  My biggest wish for next time though is that there will be more vintage hockey to leaf through.