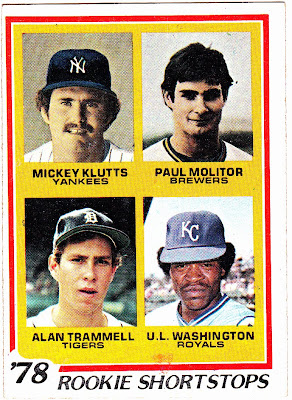 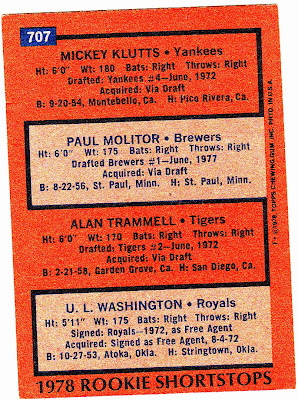 One of these days I will actually get to do a HOF rookie card post on a single player card.
Molitor was initially drafted in the 1974 draft by The Reds as a pitcher in the 28th round. He decided to go to college and play at the University of Minnesota. After 3 standout years as a Gopher, he was drafted as the third overall pick in the 1977 amateur draft.

He started his career as a shortstop, moved to second base, then to third base and then spent the second half of his career playing first base, but mostly dh’ing.

Molitor would go on to be one of the great hitters of his generation. 4 times in his career he would have over 200 hits in a season, leading the league 3 times (91, 93, 96). Him and Robin Yount electrified Milwaukee for an entire decade, the same way Braun and Fielder would have done had Prince been able to come to an agreement to stay here.

Living in Wisconsin, my greatest memory of Molitor was his 39 game hitting streak that captivated the entire state during the summer of 1987. I was never a Brewer fan, but I had a lot of respect for Molitor and the way he played growing up.

Molitor left Milwaukee after the 1992 season and signing with the Toronto Blue Jays. His first season in Toronto, he as an all star, finished second in the MVP voting to Frank Thomas, and then went on to win the MVP of the World Series while leading Toronto to their second of back to back titles.

Molitor would retire after the 1998 season with 3,319 hits, a career average of .306, 504 stolen bases, and 605 doubles. These numbers are even more astonishing when you realize that he missed over 500 career games due to injury and lost time in the strike shortened season.
“The Ignitor” was inducted into the hall of fame in 2004, his first year of eligibility with 85.2% of the vote.

As for the other players on the card, this is one of the few multi player rookie cards that had to superstars on it.